While companies like Origin Energy try to push ahead with toxic fracking plans in the Northern Territory, Aboriginal communities are speaking out about the dangers of fracking for their country, culture and the climate.

Recently, a community-led door to door survey of the remote community of Minyerri in central Northern Territory found that 99% of people do not want fracking on their land. In fact, 93% of Minyerri residents wanted a Territory wide ban on fracking.

So Seed’s been working with the community to make this message heard and declare the town a no-go zone for fracking. Together we’ve just unveiled a sign on the drive into Minyerri, demonstrating that the frackers are not welcome. 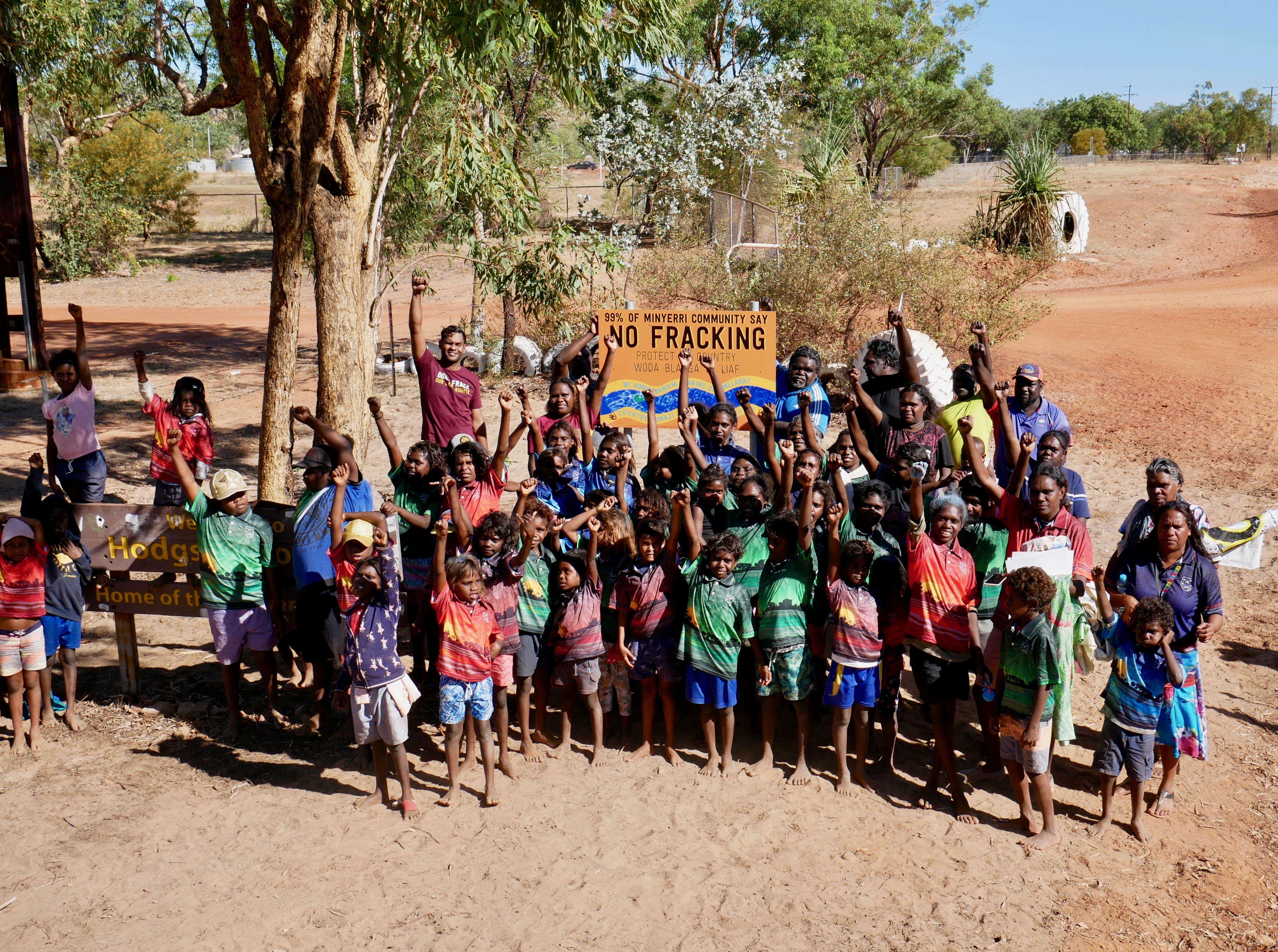 Minyerri community turned up in numbers to demonstrate their strong survey results and their no-go zone declaration. The Minyerri School children led a march, followed by the rest of the community holding anti-fracking placards and banners with original artwork from Minyerri artists. One hundred community members marched to the entrance and placed the fracking no-go zone sign in the ground, self-declaring in English and Kriol that their country was safe from fracking.

Hear stories from people in Minyerri about why they don't want to see fracking on their country...

Fracking presents risks to water, plants, animals, bush tucker, bush medicine and the climate that people in Minyerri refuse to accept. Yet even in the face of the community’s staunch resistance, Minyerri and much surrounding land of the Alawa people has been left off the list of ‘no-go zones’ that the NT Government will protect from the fracking industry.

The Government granted “No-Go zone” protection to towns, residential areas, areas of high tourism, ecological and cultural value. According to the NT Government, Minyerri met none of these requirements and is open for business for the fracking industry, along with 51.6% of the rest of the Territory.

The survey questions were written and conducted by Minyerri locals and featured questions on climate change, power cards, aspirations for the community, renewable energy, government support and fracking. The Minyerri survey also showed that community members spent an average of $72 per week on Power cards, while the average Australian pays about $30.22 a week on electricity bills.

The Minyerri community is fighting for a positive future. They have recently launched their own successful cultural enterprise, selling Gulbarn, an Alawa traditional bush medicine as herbal tea and soap. You can support the Alawa people’s economic empowerment and get yourself some ancient healing herbal tea here.

Community members fear that fracking could harm the economic opportunities already present in the community - and we’re committed to working with people in Minyerri and across the Northern Territory to make sure that their rights and health aren’t sacrificed just for the short-term profit of fracking companies like Origin Energy.

Self proclaimed fracking “no-go zones” are spreading through the Territory, with the Gulf remote community of Borroloola declaring themselves “frack-free” in 2017.

Stand with communities across the NT like Minyerri in the fight against fracking - sign the pledge to add your voice and be part of the campaign to stop fracking. 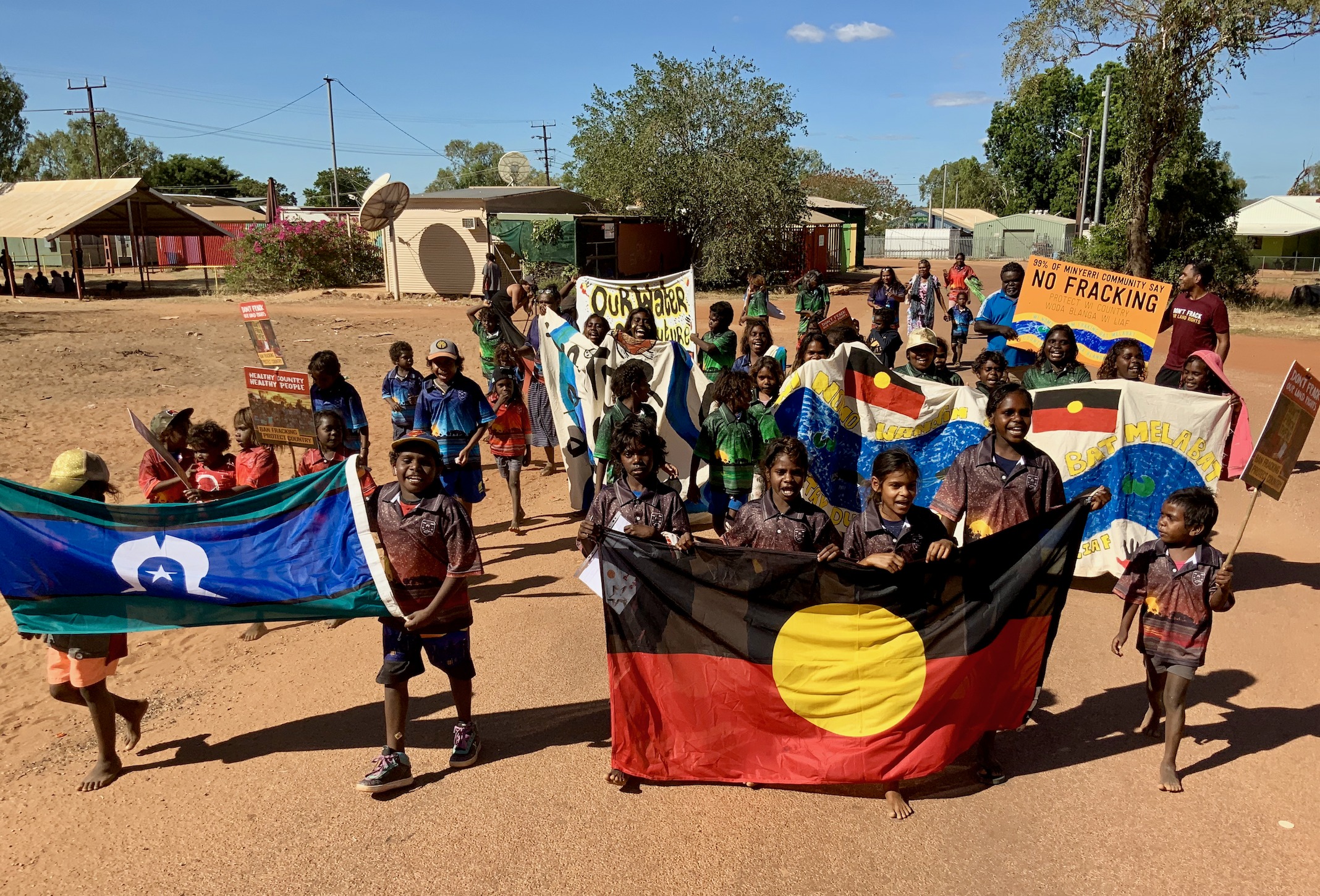 Seed is a branch of the Australian Youth Climate Coalition, a Deductible Gift Recipient (DGR) charity. All donations over $2 are tax deductible.